A Murder of Crows… (en anglais)

A Murder of Crows… (en anglais) 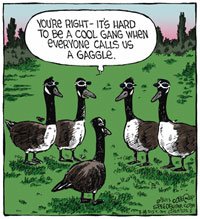 Recently, en route to Le Nichoir from my home in St-Lazare, I was happy to see a flock of Wild Turkeys in a field close to the road. Having not seen any for about a year, I stopped to watch them. This was delightful, as the male was in full courtship display! As I admired them, I wondered, “What does one call a group of turkeys?”

Many people may be familiar with collective terms such as a “murder” of crows, a “parliament” of owls and a “gaggle” of geese. But was there one for a group of turkeys? I decided to do some research and soon discovered that there were numerous collective nouns (terms which denote a specific group of persons, things or animals) for all sorts of birds.

Many collective nouns originate from the lists of “proper terms” in the Book of St. Albans, partly attributed to Dame Juliana Barnes, first published in 1486. The book contained essays on hawking, hunting and heraldry and so the terms referred to animals. Many of them are still in use today.

But what is the origin of the terms a “murder of crows”, a “parliament of owls”, and a “gaggle of geese’”? Upon further investigation, I learned that the term “murder of crows” originates from folklore: flocks of crows held trials to judge and punish members of the flock that had transgressed. If found guilty, the “defendant” was executed (that is, “murdered”) by the flock. There may be some factual basis to this, as crows are territorial and may kill another crow that has encroached on their turf.

Owls are generally solitary, but when seen together the group is called a “parliament” as they have long been considered to be of a wise disposition. In Greek mythology, the owl is the symbol for Athena, the goddess of wisdom.

Geese are called a “gaggle” as the word is imitative of the noise they make. It is derived from the Middle English term gagel, which stems from the Dutch word gagelen, meaning to cackle.

And so what is a group of turkeys called? A “rafter”!

To see a list of collective nouns of different birds commonly seen in southern Quebec, please follow this link.