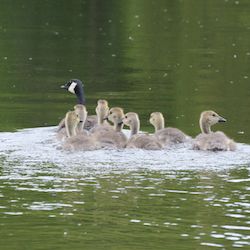 With summer upon us, the Centre is now in full swing and caring for over 150 songbirds. That’s in addition to 100 abandoned and orphaned waterfowl, such as ducklings and geese, currently under our care.

Earlier in the season, Le Nichoir received seven nestling Canada Geese, mostly from different clutches. Geese can be difficult to care for because they become habituated to people very easily. And once that happens, the birds cannot be released into the wild.

So in this particular case, staff and volunteers tried to make sure the goslings were disturbed only to be fed and cleaned. Still, there was some concern that, even with the young birds almost completely isolated from people, they would become friendly and approach us. What they really needed was a mother goose.

A short time later, the Centre received a female Canada Goose who had been hit by a car. Although her injuries were minor, one of the Centre’s volunteers, Tash, noticed that the goose had plucked feathers from her breast. This was a sign that she had been building a nest before she was injured, and was now separated from her brood—an unfortunate turn of events for her but an opportunity for the seven orphaned geese who were desperate for attention and affection.

Since it is not uncommon for wild Canada Geese to adopt other goslings as their own, Le Nichoir decided to place the adult goose with the seven orphans. Within minutes, the adult was sitting with the goslings and allowing them to crawl all over her. She had accepted them as her own. For Le Nichoir, it was an exciting event. Not only was it the first time that the Centre has witnessed a female bird without young of her own adopting orphaned goslings, but the goslings could now keep human contact to a minimum and be raised in a more natural manner.

To allow their bond to strengthen, for two weeks the adult goose and the goslings were kept in one of our flight cages, where they spent most of the day preening, bathing, eating and sleeping together. The female even went to the extent of hissing and showing aggressive displays towards the staff when we approached her and the young.

Once they were ready for release, the goslings and the adult goose were placed in carriers and brought to the edge of a large private pond. The cages were slowly opened to let the adult and the goslings walk out and head into the water together. The female led the way, swimming away from us as quickly as possible, goslings in tow.

Did you know?
In the wild, Canada Geese will often kidnap or accept the young of other geese as their own. It is not uncommon to see a pair of geese with more than 10 chicks, even though geese typically lay only between four to six eggs. Sometimes, adult pairs will even form a group with other adult pairs and form a creche where the young are cared for by all the adults. Biologists believe there are many reasons why parents would do this: they include increasing the survival chances of their own young, and having access to better feeding grounds.