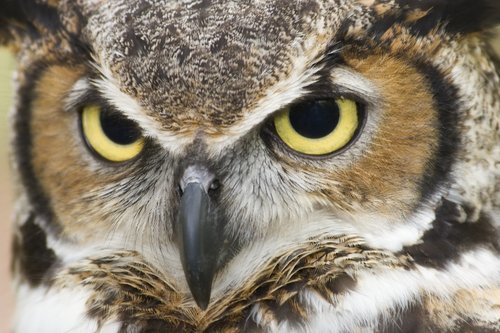 While we revel in the beauty of their plumage and admire the magnificence of their flight, to really appreciate them it actually helps to understand how birds see the world around them. Their eyes’ focus, perspective and colour sense are finely-tuned adaptations needed to locate food, evade predators, and navigate through perils.

Compared to our own eyes, and those of most other mammals, bird eyes provide better and wider ranging colour vision, greater depth of field, and much faster ability to focus. On the other hand, most birds are not able to move their eyes, and must turn their heads instead. If eyes are on either side of the head, they have a wide field — useful for detecting predators. Conversely birds of prey typically have forward-facing eyes, thereby benefitting from binocular vision, allowing them to judge perspective and distances accurately.

As with humans, there are two sorts of light receptors in a bird’s eye, rods and cones. Rods are better for night vision because they are sensitive to small quantities of light, but they give no colour information, while cones detect specific colours (or wavelengths) of light. In diurnal birds, 80% of the receptors may be cones, whereas nocturnal owls have almost all rods.

While humans have three kinds of cones, most birds have four, which are further augmented by a coloured oil droplet which acts as a filter, giving them increased colour perception and differentiation.

Individual species of birds will have very specific adaptations to the shape, characteristics, and acuity of their vision, depending on their natural habitat and diet. For example, seabirds that have to look through from the air into the water to locate fish have more deeply coloured pigments in their cones’ oil droplets than other species.

Some birds also have a visual pigment in their retinal cones which absorbs ultraviolet light, extending their vision into the ultraviolet portion of the spectrum. This UV sensitivity can be relevant for mating, with feathers showing patterns in ultraviolet light that are invisible to us. Male blue tits, for example, have a UV reflective patch which is displayed during courtship rituals.

Food may be detected by UV sensitivity. The waxy surfaces of many fruits and berries re?ect UV light, and it has also been suggested that some birds of prey may be able to locate rodents by their trails of UV-reflective urine and faeces.

Vision is a bird’s most important sense, so it is not surprising that birds have the largest eyes in relation to their size of any animal. The next time you look up at a bird, try to imagine what it sees when it’s looking down at you.