From house pet to soaring raven

From house pet to soaring raven 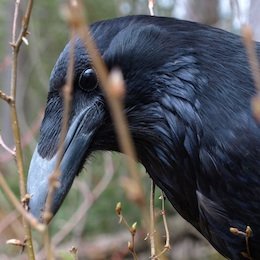 In late summer 2011, Le Nichoir received a juvenile Common Raven that had been found as a fledgling and kept as a house pet for three months. The bird was habituated to humans, so the Centre could not release it until it developed a fear of people.

Although Le Nichoir does not usually transfer birds to foster homes, it was in the best interest of the raven to place it in the care of Jim Doyle, a professional licensed falconer who has worked closely with the Centre in the past. Le Nichoir was confident that Jim had the skills and training to do a successful slow release. In his care, the bird could fly free during this process instead of being in a flight cage at Le Nichoir.

Over the next several months, Jim gave regular updates on the bird’s progress to Le Nichoir and Le Ministère des Ressources naturelles et de la Faune. This is Jim’s story of the raven that was successfully released in May 2012.

It’s early morning and I’m on my way to the little pond in the backwoods of my home in Saint-Jérome. I’ve been away a couple of days and I’m a little worried that he won’t be there. I hear crows calling from that direction but I’m listening for the familiar “croak, croak, croak”.

Slowly, I walk by a couple of mallards on the pond, the raven’s favourite spot, and head for the little creek at the far end. The crows are gone and everything is quiet. Still no sign of the raven. At the feeding area, I look around and read the signs for the last few days’ activity. The raccoon carcass that I left there is gone but there’s lots of fur on the ground. I check out the automatic camera that I set up to observe the raven: almost 200 pictures since the last time I checked. I replace the SD card and decide to wait a while—it’s such a beautiful morning.

But first, I better hide the eggs I brought with me. I look around to make sure he’s not watching me. I hide the eggs in the grass, under some leaves, in the bushes near the creek.

Waiting near this beautiful forest pond, I think about all that’s happened. How lucky the raven was to have made it so far. How lucky I was to be part of it.

It started with a call from Le Nichoir. The Centre had a young raven that Susan Wylie, the Executive Director, believed would be a good candidate for a controlled release. The bird was in decent condition but had been malnourished and had developed lesions on his talons. I was really happy to help and within a few days he was in my aviary.

My rehab plan was simple:

• Get him flying free as quickly as possible.

The feeding part was easy: I was able to get large amounts of deer meat and live quail from a local farmer.

The rehabilitation plan worked well. Ravens are very intelligent and learn quickly, so within a few weeks this bird was ready for his first free flight. It was not a spectacular flight, but it was an important step for his eventual freedom. A day I’ll always remember.

It was late fall by the time the bird’s talons were completely healed, but because of the cold weather, I decided to wait till spring for a full release.

Till then, I would let him fly free whenever possible, so he could learn crucial survival skills in the wild. But I would always call him back to the aviary for the night.

Winter went by and spring arrived early. After months of training, the raven was ready for release and I had a plan: I would have him follow me to the pond in the backwoods and I would teach him to forage for food. It was the perfect spot: nobody ever goes there and there’s lots of wildlife.

The trick was getting him to forage. I hid dog food in the vegetation around the pond while he watched me. As soon as I walked away, he would look for the nuggets.

Then, I hid nuggets or eggs when he couldn’t see me, so he would not associate me with food. It didn’t take long for him to learn. As soon as I released him from the aviary, he would fly to the pond to forage for food. Excellent!

Now it was time for the next step: leaving him outside overnight.

What worried me was the early morning. That’s when wild ravens are around, and I knew that they would try and chase the Common Raven away from their territory.

The first few days of leaving him out overnight went well. Then it happened. It was early morning and I could hear the call of wild ravens. All of a sudden, I saw the raven flying at full speed with a wild raven directly behind him. Within seconds he was out of sight. This is it, I thought: I’ve got to get to him before they chase him too far. I followed the transmitter signal through the woods and found him in a pine tree about a mile away.

Since then, I’ve seen him hide whenever the other ravens are around. He seems to have figured out a way to avoid them or somehow be accepted by them on their territory. Amazing!

It’s now been several days since the raven was released. As I wait near the pond on this beautiful morning, I finally see some movement through the trees. My heart accelerates, as I hope it’s him. But quickly I realize it’s one of the crows sneaking around the pond.

I decide to go back home and check the pictures on my SD card. Thanks to these pictures, I can see what’s been happening around the pond and many of them have been surprising.

I have pictures of him chasing squirrels and harassing hawks and vultures. More importantly, I know that he is feeding and has a secure food source as he learns to find his own.

On my way home, as I’m passing a small clearing, I notice a shadow moving swiftly across the ground. I look up and to my great joy there he is, flying high! I watch him as he soars in the wind and quickly dives, gathering speed to shoot back up, riding the wind like a surfer rides a wave. A great feeling of amazement comes over me as I watch him play in the wind, completely free, and I hear, echoing from above, the sound of his laughter.

At that moment, I realize how truly lucky I am.