Why some birds are now harder to spot

Why some birds are now harder to spot 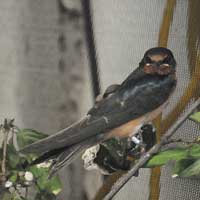 Everything was better in the old days, the saying goes – including, it seems, our ability to spot a Barn Swallow or Chimney Swift up in the sky. According to data collected by scientists, things really have changed: insectivorous bird and songbird populations have declined steadily in North America over the past decades.

Swallows have suffered the steepest decline in population among all types of birds on the continent, with the Barn Swallow population down by 75% in the last 40 years, according to Wildlife Preservation Canada. The greatest decline, the organization says, has happened in the Maritimes.

Although the data is clear, the exact reasons behind the population decline are not. Scientists speculate that threats migrating birds like swallows face to their habitat, wintering grounds and food sources from urbanization, toxic chemicals and environmental changes may be factors.

“I think that climate change plays a big role,” says biologist and Le Nichoir Executive Director, Susan Wylie. “Irregular amounts of rain, cold or heat can make it difficult on birds, especially during nesting and migration.”

Recently, experts have been studying the impact of various factors on specific bird populations. 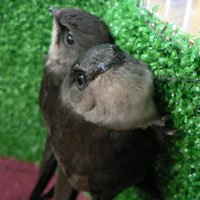 At Queen’s University in Kingston, Ont., a team of researchers analyzed 50 years’ worth of Chimney Swift droppings in a chimney on campus. They concluded that a dip in Swift population can be linked to a decrease in the bird’s consumption of beetles. For years, the beetle population was affected by the use of the toxic insecticide, DDT. With fewer beetles around, Chimney Swifts turned to lower-quality foods and subsequently experienced their own population decline.

With their numbers shrinking, both the Chimney Swift and the Barn Swallow have been declared threatened in Canada. Le Nichoir takes caring for these birds very seriously. In 2012, the Centre had a release rate of over 85% for threatened species.

“Our main priority is to make sure that these birds are in excellent condition when they’re released,” says Susan. “We want them to be viable individuals that are able to reproduce and contribute to their populations.”

But research and rehabilitation are not the only ways to address the problem. Susan says there are things you can do to help threatened birds thrive:
• Buy local fruits and vegetables that are pesticide-free
• Plant flowers, trees and shrubs that attract insects in your garden
• Install bird-houses specifically made for swallows.