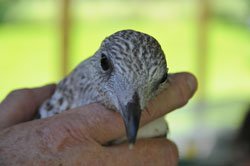 Early in July, we received a call from Auberge Zen (an animal shelter in Laval) about a “seagull” found entangled in fishing line, suspended in mid-air by its feet. With the help of the local Laval fire department, the bird was eventually detangled, and transported to Le Nichoir.

The preliminary examination showed that the juvenile ring-billed gull had no external injuries and had not suffered any dislocation from being suspended by its’ feet, with both legs responding positively to reflex tests. However, at this point the young bird was underweight and was still lying on its stomach with both of its legs extended backwards. It was questionable whether the gull would be able to recover use of both legs. After being treated with anti-inflammatory medication, the gull was moved to the Quiet Room, where it could recover away from the public eye.

To our surprise the next day, the ring-billed gull was standing upright on both legs and had eaten all of its’ fish! The bird maintained a healthy appetite and was walking in its’ carrier putting weight on both legs equally, showing no signs of discomfort.

A week later, after a thorough re-evaluation, we moved the bird outside to one of our aquatic aviaries to monitor if it could cope walking in a larger area, and most importantly, if it could swim. There were three other ring-billed gulls of approximately the same age already in the aviary, and as soon as we opened the transport box, the gull jumped right out. It stretched and flapped out both of its wings, made small jumps across the aviary chattering to the other two birds the whole time. It eventually made its way to the pool, dove in head first, and paddled its way to the other side. In a few days, we noticed that the gull was flapping its’ wings. It was time for it to be released.

The ring-billed gull was released on July 21st at Vaudreuil-sur-le-lac, Quebec with the help of our volunteers.