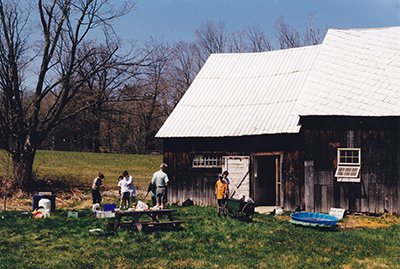 When Le Nichoir founder, Lynn Miller, and her team swung open the doors of Marnie Clarke’s barn for the first time, it must have been quite a shock. The year was 1996, and decades of abandonment had taken a heavy toll on the structure. The floor could not be seen, it was buried under rotting hay, in some places knee deep! The farm animals were long gone but the barn was inhabited by a host of furry creatures and even a few garter snakes.

Undaunted, the crew set to work on a major clean up aided by a local Boy Scout troop. They removed wheelbarrow after wheelbarrow of hay for composting and lit bonfires to get rid of other debris. Work then began inside the barn, still with volunteer labour, carving out a workable space to receive and treat wild bird patients. New partitioning created an admissions area, a clinic and an indoor aviary that was secure enough to prevent the raccoons from eating the patients when the staff had gone home for the night. Over the following years, further improvements were made to the barn and outside aviaries were added to increase capacity and improve rehab services for the birds.

While the challenges in the barnyard were many, there were some natural advantages to the site. A good example was a large manure pile conveniently located right beside the back door. Renamed the worm pit, it provided an endless supply of food for hungry insectivores, and a creek flowing through the property was used to hold fish bait buckets full of live minnows to feed aquatic birds.

As word of the good works gradually spread, fundraising became easier. “For The Birds” — a dinner auction started in the late nineties and later renamed “A Taste of Hudson” — was an instant success and became Le Nichoir’s main fundraising event until it was suspended in 2020 due to the COVID 19 pandemic. But, as Lynn Miller tells it, the most memorable donation occurred in the fall of 1999 in the form of a $5,000 grant from a foundation. The staff celebrated by immediately applying the funds to a septic system servicing an enclosed bathroom with a flush toilet!