This White-breasted Nuthatch was found outside a window, stunned and barely moving on April 5th. The person who found the bird noticed some blood on the bird’s face and reacted quickly, bringing the bird directly to Le Nichoir.

Once at the Centre, the bird had shallow breathing and was lethargic. After a quick basic exam not to cause the bird more stress, our team assessed that the Nuthatch was slightly dehydrated, had an eye injury, and one ear clogged with dried blood. The bird was provided fluids for rehydration and placed on oxygen. As the bird’s condition became more stable, our team provided medication and eye drops and began cleaning out the dried blood from its ear. After a few days, the Nuthatch began to feel better. It regained its balance and began moving around its cage. Its injured eye showed signs of healing. Within two weeks, the bird was moving and flying well enough in its cage to be moved into one of the outdoor aviaries. There it will continue to rebuild its flight muscles before being released. 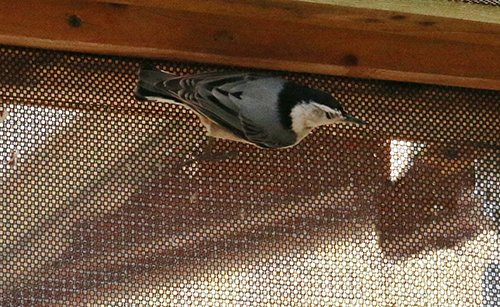