Birds are experts at raising their young

Birds are experts at raising their young

A young fledgling Veery that had been unintentionally taken from its parents was admitted in mid-June. Slightly smaller than an American Robin, Veerys are part of the Thrush family. They nest on the ground, or close to the ground, making them vulnerable to being taken or “kidnapped” by the public.

Many songbird fledglings spend weeks on the ground before they can fly well. This period is a critical part of the birds’ development and learning to help them prepare for survival in the wild. Parents will not stay with them, and will only feed their young every few hours. Most bird parents are afraid of people. They will not approach you, even if you approach their young. Healthy fledglings should never be removed from their parents. 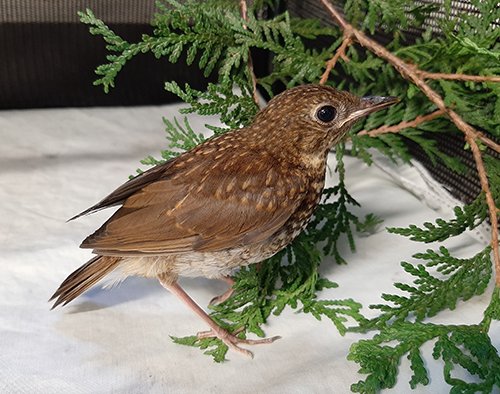 This young Veery has transitioned from nestling to fledgling under our care. Upon arrival at the Centre, the bird was provided with subcutaneous fluids and fed insects. Since then, it has been fed mealworms and crickets as well as other foods on an hourly basis and has grown into a healthy, robust juvenile, now hunting its own prey. The bird has been placed in one of songbird aviaries, where it will perfect its flight and hunting skills before being released in the next two weeks.