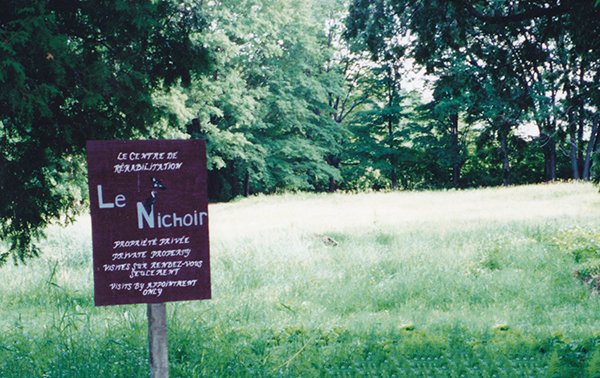 For 20 years, Le Nichoir struggled, and remarkably succeeded, in Marnie Clarke’s old barn. Operating under these conditions was a challenge, to be sure! Not only were the facilities seriously lacking in almost every way imaginable, but the barn was by definition a seasonal home, requiring a complete upheaval and move to a winter site each fall and an equally stressful return to the barn in the spring. No wonder the staff’s thoughts turned towards creating a permanent state-of-the-art home for Le Nichoir. By the time the New Centre Project was launched in 2009, a very well thought out wish list had been created to define exactly what was needed. So, in this sense, the barnyard years might be considered a blessing in disguise.

Those years were also an important period of professional development for the field of wildlife rehabilitation and for our staff. It was a time of growing public appreciation of the importance of conserving the natural world, with several environmental organizations rising to the fore. Of particular interest to Le Nichoir was the International Wildlife Rehabilitation Council (IWRC), which emerged as a leader in education and resources for wildlife conservation worldwide. Both Lynn Miller, Le Nichoir’s cofounder, and Susan Wylie, the current Director of Operations, have played active roles in IWRC. Both have served as president and on the Board of Directors.

From those early years with the IWRC to today, Le Nichoir has emphasised and invested in continuing education for its team of wildlife biologists. That education coupled with hands-on learning at our Centre has created a valuable body of knowledge uniquely suited to the needs of Le Nichoir’s wild bird patients, and it is continuously growing through experience as it is put into practice every day. Wildlife rehabilitation and teaching conservation go hand in hand. With this in mind, Le Nichoir launched its education program in 2014, hiring a wildlife biologist as full-time educator. Since then, we have been teaching people of all ages about the value of birds for the health of our planet through interactive education programs, seminars and family activities.

All those years in the barnyard have amounted to much more than thousands of wild birds in need receiving care – which is certainly a very important outcome. More than that, the barnyard years were also a period of learning and growing that built the solid foundation upon which the amazing Le Nichoir sits today, celebrating its 25th anniversary.