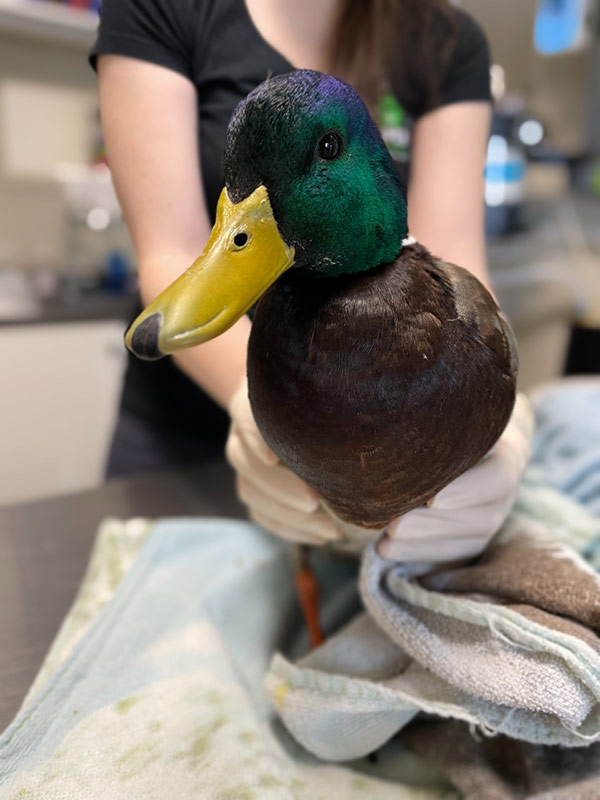 Birds from all over Quebec are brought to Le Nichoir. Sometimes it takes a number of kind-hearted individuals to get an injured bird to us. This very handsome mallard duck was found covered in ice on the shoreline of the Saint Lawrence River, south of Montreal. The rescuer noticed the duck needed help and was able to capture it and take it to the nearby Roussillon SPCA. The Roussillon SPCA team, who have helped Le Nichoir on many occasions, was able to accept the bird and transfer it to Le Nichoir that same day.

Upon its arrival at the Centre, our wildlife biologists noticed that the bird was emaciated and its feet showed signs of frostbite. Luckily, it had no other injuries. Feeding an emaciated patient is a calculated process. Offering solid food too soon can lead to serious consequences for the patient. In this case, the mallard was given a boost of fluids and carefully tube-fed a recovery diet to help restore its strength before being moved to a warm enclosure to rest.

After spending a few weeks under the watchful eyes of our biologists and volunteers, our mallard has made a full recovery. Its weight doubled and its feet healed completely, paving the way for its release with other mallards.