Uncommon story for a Common Goldeneye

Uncommon story for a Common Goldeneye 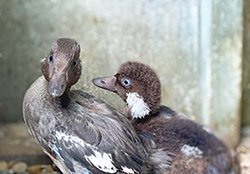 In early June, this little Common Goldeneye arrived at Le Nichoir in an unusual way: it was flown to Nichoir by plane!  Found with no parents in sight by Refuge Pageau, a rehabilitation centre in Amos Quebec, the duckling was quickly transferred to us with the help of Nolinor Aviation. Once at Nichoir, the baby was stabilized and examined before being given medication against parasites. Luckily, the duckling had no injuries, but a big appetite. We quickly discovered that fish, worms, shrimps, and snails were its favorite foods. After the duckling gained some weight, it was introduced into an indoor pen together with another goldeneye duckling we had in care, and the two quickly became inseparable. They now spend their days outside in one of our aquatic aviaries where they will continue to grow until they are old enough to be released.